Tulip Flower Painting. Draw a purple tulip flower. Tulips are the most widely cultivated flower plant by humans. This painting was made by a Balinese artist. And made with oil paint on canvas.

The people of the Ottoman Empire from Turkey really liked the beauty of tulips. This is evidenced by the cultivation of this flower since 1000 AD in Turkey. Tulips are often used as motifs in Turkish and Persian ornaments. The shape of a tulip that has not fully bloomed resembles the shape of a turban or turban. Therefore, the Europeans also named this flower after the Persian language, namely dulband. While in Indonesian, tulips are called tulips.

Tulips can spread to Europe. Because it was introduced by Ogier de Busbecq, an ambassador from the time of the Holy Roman Empire. Initially the Sultan of Turkey sent tulip bulbs and seeds to Vienna, Austria. In 1554 from Austria, tulip bulbs were brought to Antwerp and Amsterdam, the Netherlands. Unexpectedly, in the Netherlands this flower became very popular and began to be cultivated in 1593. A botanist named Carolus Clusius who teaches at the University of Leiden, the Netherlands. He started planting tulip bulbs and grew the tulip population.

In the 17th century, tulips were introduced to the Kingdom of the Netherlands. Because of its beauty, the Dutch also like this plant. Until finally there was a phenomenon called tulip mania or tulipomania. The price of tulip bulbs is very high because of the large number of enthusiasts. However, this situation did not last long. Because in a short time the price fell sharply because supplies were sufficient.

Tulips have layered bulbs that are similar to bulbs in onions. This layered tuber serves as a place to store food reserves. As well as a means of asexual reproduction.In addition, in this layer tuber there are also flower buds, leaf buds, and tubers. Beneath the bulbs are the roots of the tulips. The root system of the tulip is under the bulb. Tulip root is a taproot that grows vertically. On the root surface there are buds which later turn into small leaves.Tulip plants have round stems, but in some types there are also triangular shapes. Trulit stems have a segmented structure, almost the same as bamboo stems. The function of the stem is for the growth of flowers and plays an important role in the process of photosynthesis.

The leaves of the tulip plant are oval and elongated. The ends are slightly tapered and blunt. The leaves of the tulips are bluish-green in color and have a waxy coating. The function of the leaves on the tulip plant is as a place of photosynthesis. And a place for evaporation when there is excess water. In addition, the leaves also function as a tulip breath. Leaves have stomata which are the place where CO2 and O2 are exchanged. 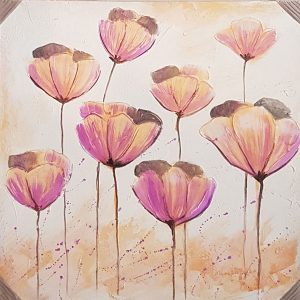